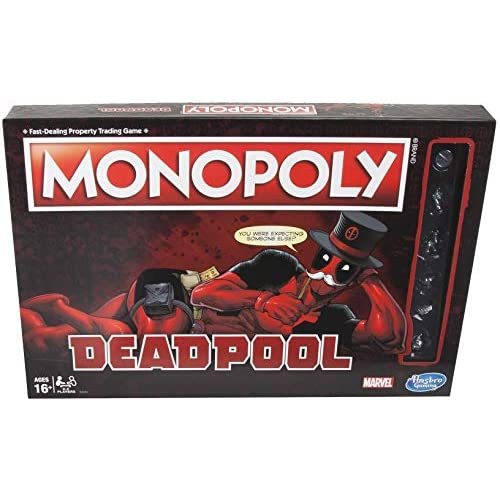 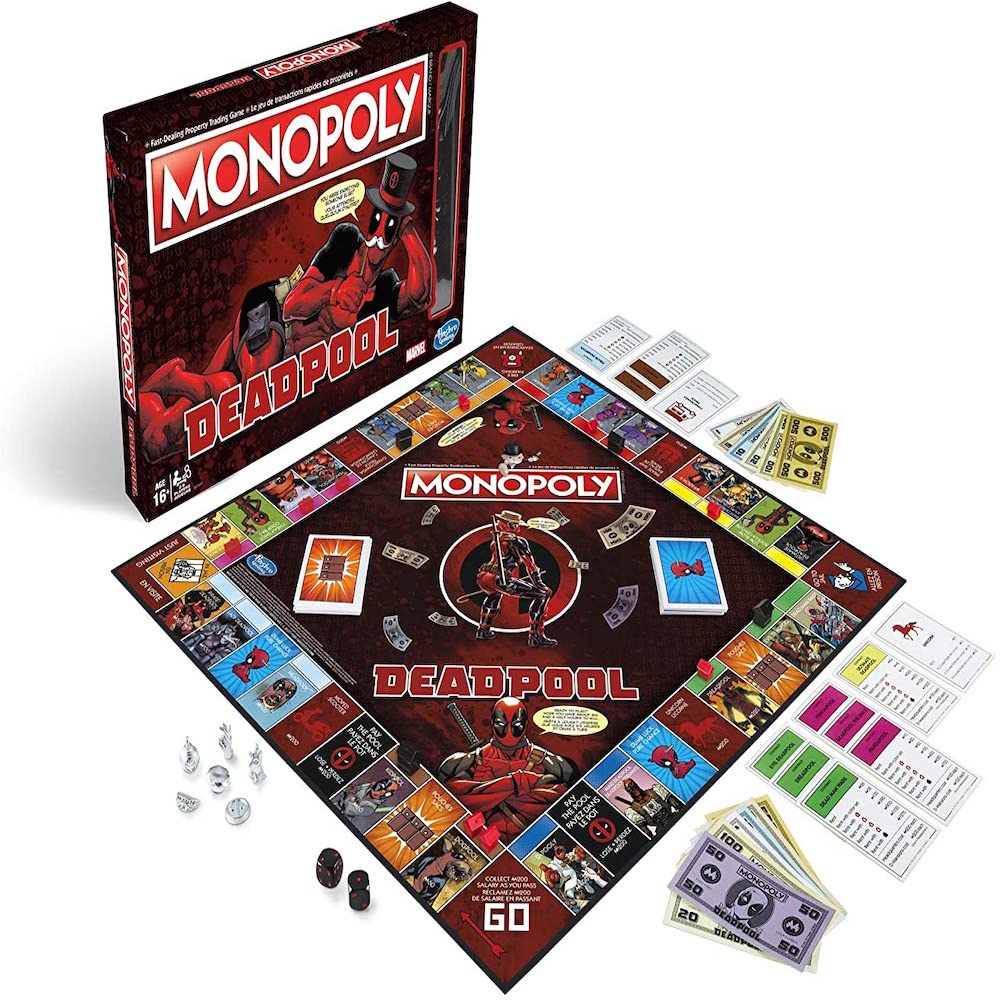 Deadpool meets the Monopoly game like peanut butter and fried trout, it's a perfect match! In the Monopoly: Deadpool Edition game players build their own team of Mercs for money as they purchase the contracts of the world's best mercenaries. Some are Deadpool's allies, some are Deadpool’s from alternate universes, and one is just Deadpool in a maid outfit. Other players have to pay a fee when they land on Mercs.

Get ready to wheel and deal, buy vehicles like a chimichanga truck, and steal friends' stuff with the Cheap Shot and Low Blow spaces.

Introducing the Monopoly game inspired by the popular anti-hero, Deadpool. This edition includes everything players need for traditional Monopoly gameplay, with elements based on the characters, art, and dry humor of Marvel's comic book character. Players get to choose from Deadpool-themed locations, and tokens including the Deadpool logo, an 'okay' hand, a Deadpool bomb, a unicorn, a taco, and a chef’s hat.

The Monopoly Game: Marvel Deadpool Edition features Contract, Pouches, and Dumb Luck cards. They're the Marvel Deadpool versions of traditional Monopoly Chance and Community Chest Cards. The cards express the dry humor of Marvel's comic book character with sayings like, 'You're the new world record holder for ‘Most Chimichangas Eaten in 6 Minutes.’ Anyone know where the bathroom is?' and 'D-Pooly is about to drop some sick beats on this game-izzle, Yo!' The game also features Cheap Shot and Low Blow Spaces, where players can steal opponents' stuff in typical Deadpool fashion.

How to Win - Players move around the board hiring as many Mercenaries and buying as many Sweet Rides as they can. The more players own, the more cash they'll get. The last player with any money when all other players have gone bankrupt wins! (And yet, they'll still feel so empty inside.

The Hasbro Gaming, Parker Brothers, and Monopoly names and logos, the distinctive design of the gameboard, the four corner squares, the Mr. Monopoly name and character, as well as each of the distinctive elements of the board and playing pieces are trademarks of Hasbro for its property trading game and game equipment.